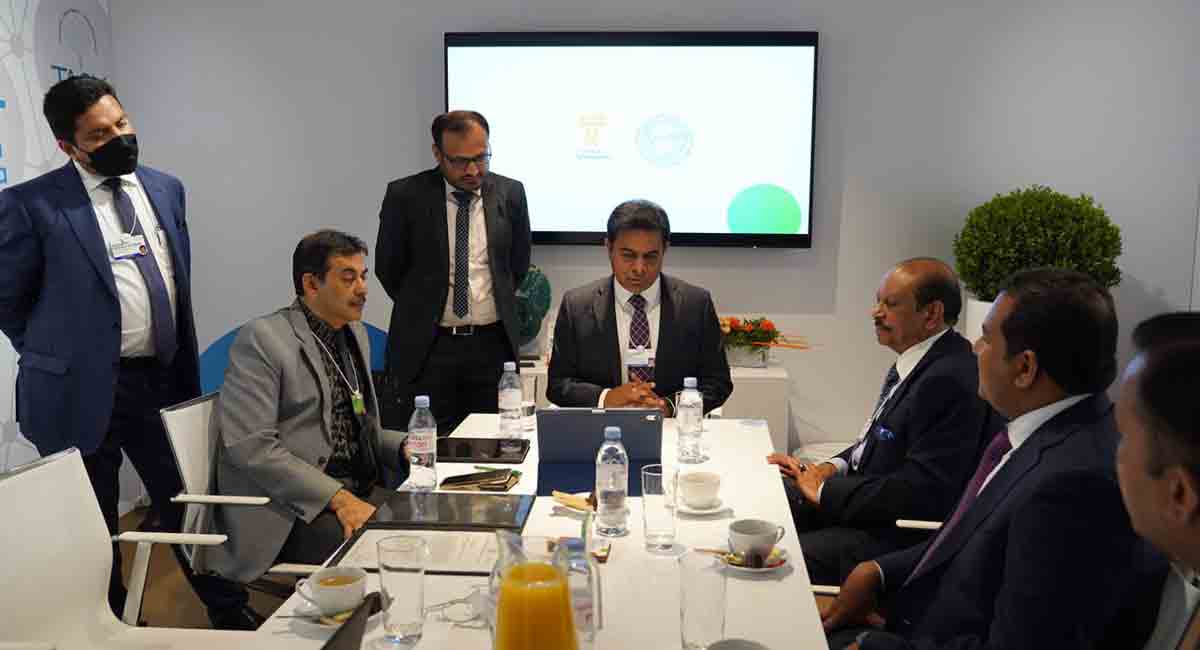 Hyderabad: On the first day of the World Economic Forum (WEF) meetings in Davos, Industry Minister KT Rama Rao brought over Rs. 600 million in investments into Telangana. While LuLu Group has announced Rs. 500 crore investments in the food processing sector, Chemo Pharma in Spain has declared an investment of Rs. 100 crore for the expansion of its unit in Hyderabad over the next two years . Zurich-based Swiss Re has also announced that it will establish its unit in Hyderabad in August this year.

LuLu Group’s announcement came after Industry Minister KT Rama Rao met with the group’s Chairman and CEO MA Yusuff Ali at the WEF meeting on Monday. Shortly after the group’s announcement, the minister handed over the permission letters from the Telangana government to set up its food processing unit in the state. “We are also working on setting up another food processing unit in Telangana. An official announcement will be made shortly,” MA Yusuff Ali told the minister.

The foundations of these units will soon be laid and they will be involved in the export of food processing products from Telangana to Europe and other countries, he said. In addition to the food processing sector, the LuLu Group also wanted to invest heavily in the construction sector, especially shopping complexes. The company has already identified a few locations and was in talks with a few managements building shopping complexes, LuLu Group Chairman and Managing Director MA Yusuff Ali said, adding “The aim is to build a mega shopping mall in Hyderabad with international standards.”

In response, KT Rama Rao said Hyderabad was one of the fastest developing cities and expressed satisfaction with LuLu Group’s investment in the city. The government of Telangana was working to promote agricultural and related sector products through different food processing units. LuLu Group’s investment would further strengthen the state government’s efforts in this regard, he said.

In 2018, Chemo India Formulation started its operations at Genome Valley, Hyderabad. Since then, the company has invested around Rs. 170 crores so far, in addition to employing nearly 270 people. During his meeting with KT Rama Rao, Dr. Jean said that the company has undertaken about 25 new development projects in solids and 12 new development projects in injectables.

KT Rama Rao said, “I am delighted that Chemo, a leading pharmaceutical company, continues to grow from Hyderabad. It is indeed a testament to the life science ecosystem in Genome City and Valley.

Earlier today, the Minister said that Swiss Re would establish its unit in Hyderabad in August this year. It will be a new addition to the city’s banking, financial services and insurance sector. Sharing these details on Twitter, the Minister of Industries tweeted “Glad to announce a significant addition to Hyderabad’s BFSI ecosystem. Swiss Re is a 160-year-old insurance organization, headquartered in Zurich, Switzerland, and operates in 80 locations worldwide.

The minister further tweeted “Swiss Re’s center in Hyderabad will start with an initial staff of 250 and will focus on data and digital capabilities, product modeling and risk management.”

You can now get handpicked stories from Telangana today on Telegram every day. Click the link to subscribe.