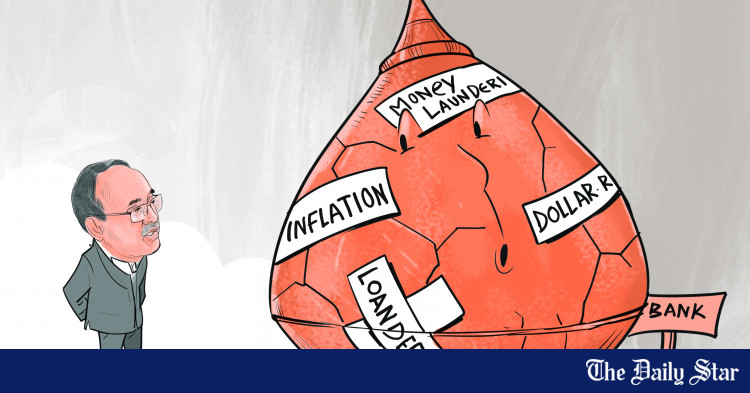 The new governor of Bangladesh Bank (BB) has sent strong messages to the country’s banking and financial sector. Abdur Rouf Talukder, former finance secretary, is a seasoned man who steered the ministry’s budgets for fiscal years 2021 and 2022 in the right direction at a most critical time when the Covid pandemic swept the planet. Bangladesh, the most densely populated country with a limited health care budget, was expected to face countless deaths and severe economic disaster. But that didn’t happen. Bangladesh was among the few to successfully stave off recession as major economies plunged into negative growth. Talukder’s experience at the time as finance secretary should be a big plus to heading the central bank.

However, the banking sector is different and complex. It is plagued by the ever-increasing number of non-performing loans (NPLs), the roots of which are mainly psychopolitical in nature – not necessarily economic. Defaulted loans amount to more than Tk 113,000 crore, 166 times more than the amount of unrecovered funds stolen in the 2016 heist that led to the resignation of then Governor Dr Atiur Rahman . The default amount that the press now knows is far less than the actual amount, because the definition of default has been changed and sugarcoated many times to please the super-rich.

For all the latest news, follow the Daily Star’s Google News channel.

Redefining or restructuring has always sent dangerous messages, which have further encouraged habitual looters to continue their plunder of people’s money from banks. The new governor must not resort to softer definitions or restructuring proposals from tycoons and family oligarchs. He promised to step up inspections and implement international capital adequacy standards. His promise to bring delinquent loans down to a reasonable ratio is commendable. This should be his number one commitment, and he must maintain credibility through action.

Current inflation is mainly driven by the supply shock. And Governor Talukder has no weapon in his monetary arsenal to convince President Vladimir Putin to stop the Russian-Ukrainian war. Putin appears to continue his aggression in Ukraine as long as he earns extra profits selling gas and oil. Bangladesh cannot escape the global heat wave of rising energy and commodity prices. Another reason why inflation will remain stubbornly high is the strengthening of the dollar – not only against the taka, but also against all the hard currencies of the world.

So will the Bangladesh Bank sit idle and watch inflation soar? Not really. He must pay little heed to the ambitious 7.5% growth rate set by the Ministry of Finance and control credit growth, especially for large borrowers. This is where the question of a regulator’s independence lies. Governor Talukder, from day one, was committed to making the central bank an intellectually and professionally stimulated regulatory agency. His mission statement is in line with the Bangladesh Bank Order of 1972 and its essential amendment in 2003. He clarified that he left his position in the secretariat and now heads the central bank, where the board only oversees important decisions. . It is the right state of mind, which must remain as the beacon during all its navigation of the ship.

Very few governors over the past few decades have inherited such a terrible mess as Governor Talukder just pointed out. In addition to bloated loan defaults, high inflation and depleted foreign exchange reserves are the two ominous signs that the entire industry fears to see. The taka continues to decline daily due to past flawed out-of-market exchange rate policy. Import growth outstripped exports, making the trade deficit the highest on record. Growth in remittances has declined, paving the way for higher current account deficits. Consequently, foreign exchange reserves are sliding towards a precarious state. Money smugglers and Hundi lords prepared to divert funds abroad, despite good prospects for investment in local markets. The governor is expected to work tirelessly to first deal with the mess that has surfaced over the last year or so, and then to streamline the rules of the monetary economy. He will win the battle as long as he is able to convince the Prime Minister that his actions are theoretically correct – perhaps temporarily bitter, but sweet for the long-term interest of the economy.

The new governor must strengthen the research department and engage them in different studies necessary for policy-making. Their findings would be key to moving decisions forward. It is imperative to sit on the monetary policy committee at least once a month or more. India conducts monetary policy at least four times a year, the United States eight times, while Bangladesh only once. This may be acceptable if review or evaluation meetings are held at least quarterly.

The outcome of shunning researchers or pundits, and being cloistered in the circle of Tory MPs hasn’t been good in the past – nor has the tactic of hiding from financial journalists. Nor was it genuine to let someone else speak on behalf of the governor. US Fed Chairman Jerome Powell always faces reporters after each of his policy moves. The signal is a hundred times more effective when the industry hears something from the governor, rather than from a spokesperson. This is how a governor is different from a finance secretary, and many have forgotten that in the past.

Raising the repo rate from 5% to 5.5% is fine as a gesture, but worthless as an inflation-fighting policy until the 9% cap on the lending rate is not entirely removed. Sound deposit mobilization is not possible until exorbitant off-market interest rates prevail on National Savings Certificates (NSCs) or Sanchayapatra. In a concluding note, the former governor considered Sanchayapatra as the government’s costliest borrowing tool and viewed it as a barrier to the capital market.

The central bank governor must convince the government to cut NSC rates. Ownership of the NSC should be transferred to the banking sector after the dismantling of the National Directorate of Savings. Bangladesh Bank is a regulatory body that helps to maximize employment and therefore it should require all banks to submit reports on their annual job creation, not just reports on profits exceptional. If Poet Milton is right in saying “morning brings day”, Governor Talukder will find heaven again by strengthening the backbone of Bangladesh Bank and transforming the institution into a knowledge-based regulator of the country’s banking sector.

Dr Birupaksha Paul is Professor of Economics at the State University of New York at Cortland in the United States and former Chief Economist of Bangladesh Bank.